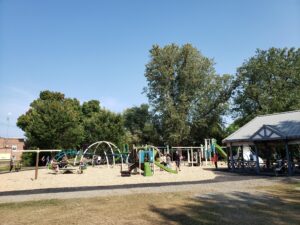 The Village of Williamsville on Friday, Sept. 25, officially opened a new playground that features an array of amusing apparatus, including handicapped-accessible play items, as well as swings, slides and a net climbing structure.

The playground, set near the front of Island Park, replaces the former structure that was outdated and becoming a safety hazard after being used by the community for more than 25 years. This is the second new play area the Village of Williamsville has opened since August 2019, when Nature Play at Glen Park was introduced to the community.

“Nobody can argue that the former Island Park playground was long overdue for a replacement,” said Williamsville Mayor Deb Rogers. “Well-designed and maintained parks play a critical role in the overall success of a walkable community. Our village residents deserve nothing less. It is an honor to serve with this Village Board, which recognizes the value of our public parks as well as understanding the valuable role they play for our village residents and visitors alike.”

Village Trustee Matt Etu, who is liaison to the Parks Committee and has overseen development of a new village parks master plan, added that the new playground is a “quantum leap forward in the recreational features that the village currently offers.”

“This is the perfect way to begin realizing our parks master plan,” Etu said. “I am honored to cut the ribbon on this new amenity that will serve our community for decades to come.”

The Island Park playground is the first in a series of upgrades planned for the village’s parks within the next five years. In spring 2019, the Parks Committee – an all-volunteer panel – initiated the creation of a guidance document, referred to as Picture Our Parks 2025.

The five-year plan calls for the reinvigoration of Island Park, the complete redevelopment and renewal of South Long Park, as well as minor improvements and capital projects for the balance of village parks.
To fund the playground and its installation, the village is acquiring a State and Municipal Facilities program grant totaling $125,000. State Assemblymember Karen McMahon, D-Amherst,/Pendleton, is assisting the village in securing the grant.

“I’m proud to have worked with Mayor Deb Rogers to secure state funding for these important improvements to Island Park,” McMahon said. “The renovations have taken an outdated and potentially dangerous playground and replaced it with safe, state-of-the-art equipment that can be enjoyed by everyone, particularly the new, handicapped-accessible We-saw, a seesaw that can be used by four children at once. This park is the center of our village, and an attraction for visitors from across Western New York. Families can now play on safe and updated equipment and fully enjoy this beautiful community space.”

In addition to the We-saw, specialty equipment in the playground design includes:

Additionally, the playground is equipped with swings, slides and toys for ages 2 to 12, and is conveniently situated around the existing park gazebo to provide an oasis from the sun or a place for a picnic.

The playground was designed by Parkitechts, a playground design and build company, with input from the Village Board, area students, the Parks Committee and a Playground Build Steering Committee, which was charged with the task of establishing a community-based build of the playground.

“The design process followed by our dedicated Parks Committee, with feedback from Mill Middle School students, led the experts at Parkitects to develop a functionally-linked design where individual play elements were at the ground level so that we could provide a larger array of play equipment with the goal of providing the greatest accessibility for everyone,” Etu said.

Through the efforts of the steering committee and the re-established Friends of Williamsville Parks, dozens of volunteers worked together –within social and physical distant guidelines – for two days earlier this month to complete the installation of the playground.

Etu said Friends of Williamsville Parks is a community organization initiated by Parks Committee Chairperson Noel Bartlo. It was formed as a way to raise money for the current Garrison Park playground. Etu said the organization has “new life breathed into it because transformational projects like this playground and other projects featured in Picture Our Parks 2025 have inspired our residents and neighbors to become engaged in their community in a meaningful way.”

The trustee added that without the energetic dedication of the steering committee members and the volunteers who assisted in building the playground, the task would have been much more difficult.

“Our project volunteers were so excited and engaged, so ready to do whatever needed doing to bring this project to fruition,” Etu said. “Those who volunteered to help with the build and who spent 12 hours on Sept. 11 and steadfastly worked through hours of non-stop drenching rain on Sept. 13, are a testament to the heart of our community. To date, this counts as the singularly most rewarding moment I have experienced as a trustee, and I attribute that to the passion of our volunteers.”

The Friends of Williamsville Parks is thankful for the donations provided by its playground build sponsors, including Lowe’s, Home Depot, Wegmans, Tops and Ed Young’s Hardware.

“I would be remiss if I did not acknowledge the extraordinary efforts of the Village’s DPW, which toiled for weeks to provide the community-build volunteers with what Parkitects has described as the epitome of what a site preparation should look like.”

For more information about Parkitechts, visit www.PlaygroundInfo.com. Further details about the village’s Picture Our Parks 2025 plan can be found by visiting www.WalkableWilliamsville.com.