The kaleidoscope-themed mural – which features an array of bright shapes contrasted against a deep blue-purple background – is painted on the side of the Department of Public Works headquarters, located at 40 S. Long Street across from South Long Park. Prior to Cherry’s project, the wall of the public works building was a pale-yellow color. The mural was completed within a two-week period as Cherry painted 12-to 14-hours each day starting in early September,

According to Mayor Deb Rogers, who led the Village Board in selecting Cherry as the artist while also mural’s theme, the goal of the public art was to create a more appealing setting for both DPW employees and visitors of South Long Park.

“The DPW building called for an abstract piece of art due to many obstructions on the building facade.  The typical mural scene was not a viable option,” Rogers said. “With its close proximity to South Long Park the idea of a kaleidoscope came to mind. Prior to the mural, the area looked strictly utilitarian and unwelcoming.  The mural enlivened the building and brought forth a renewed sense of pride in our village.”

Cherry said that creating the mural and working within the mayor’s vision was an inspirational experience, which is reflected in the mural’s title.

“I found that at the end of the day when I would reflect back at the mural, I would take a second to breathe in positivity and I found myself day dreaming,” she said. “The art was inspiring my thoughts I encourage anyone to try it. There’s some wooden benches right in front of this to do so.”

The Artist and the Process

Cherry, who painted her first mural in 2005 when as a high school senior, has more than 20 murals throughout the Western New York region. In 2010, Cherry graduated from Buffalo State College after earning a degree in art and graphic design.

Cherry said that originally, black was chosen as the background color. However, due to the vinyl siding at the top of the wall, an all dark color could not be used because the sun’s heat could warp the material.

“I was able to find a bluish-purple color named ‘dignified’ that did not have a lot of black within the pigment,” Cherry said. “I think it works great with the other colors of the mural! I tried to play with cool tones vs warm tones in order to flow your eye around the piece. The process to painting any mural is endurance, endurance, endurance. As well as some sunscreen.”

She added that one of the highlights of creating the mural was receiving daily visits from people who live in the neighborhood.

“I loved to hear what they think as well as hear their stories that they were inspired to tell,” Cherry said. “Also thank you to those people who brought me ice cold water on some of the hot days.” It really shows how much love is in this world knowing a complete stranger is looking out for you.”

“Nicole is a talented urban artist,” Rogers said. “The kaleidoscope evokes a sense of the unexpected to pedestrians while offering up a playful demeanor as the backdrop of South Long Park.” 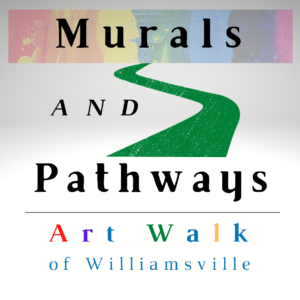 Developed by Keaton DePriest, the village’s director of community development, the campaign presents the walkable connection to Williamsville’s three murals, all of which are among the village’s park system. The village’s first two murals – both of which were dedicated within the past year – are located within the Pocket Park and Glen Park. They are respectively titled “A Butterfly’s View of the Garden” and “Glen In Bloom.”

“The mission of Murals and Pathways is to allow residents, visitors and the entire community to share in the joy of public art,” DePriest said. “The murals intertwine the village’s walkable ideology by creating a self-guided walking tour of public art. This is a special campaign for our community and I am glad to be a part of something that can create so much joy.”

“The Village of Williamsville is a destination,” she said. “In this moment, public art helps to set a community apart by creating a type of cultural identity. By adding more murals throughout the village the existing cultural tourism will continue to flourish.”

Subsequent mural projects are planned to be part of the art walk. DePriest said that a Murals and Pathways map is in the process of being created for digital distribution within the community.